Who we are.
Careers.
Contact us.
Book a demo.
For Financial Services 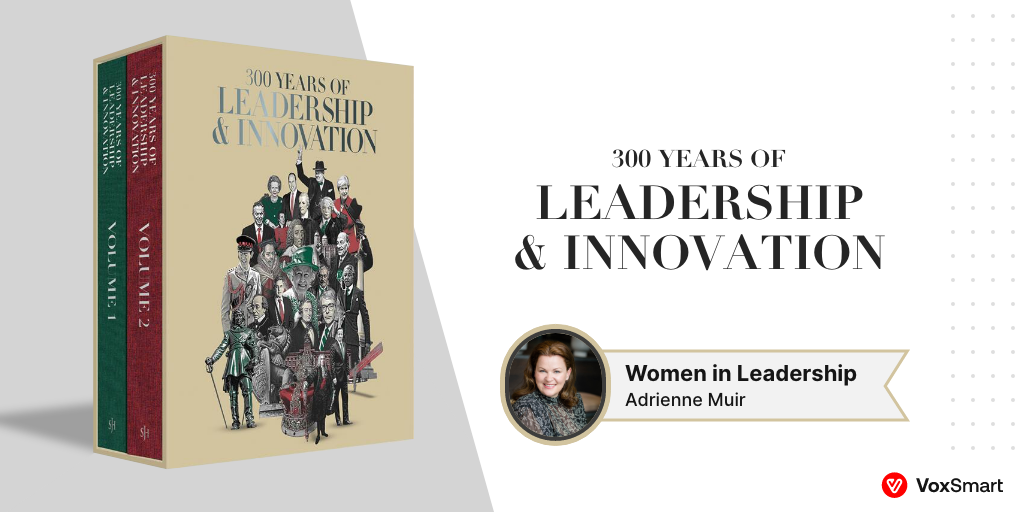 VoxSmart’s Adrienne Muir is honored to be selected as a featured organisation in the upcoming release of 300 Years of Leadership and Innovation commemorative album, produced in partnership by the History of Parliament Trust – one of the most respected and authoritative research projects in British history – and publisher St James’s House.

Adrienne Muir is to be featured in volume two under Women in Leadership, a section dedicated Her Majesty the Queen, Queen and Country.

Continued innovation, combined with hiring the right people and fostering the right culture, has driven VoxSmart’s success. Strong leadership and values have ensured the company maintains focused and driven along their journey of becoming leaders in technology.

Adrienne has worked tirelessly building VoxSmart, “Having been here from the beginning as one of 10 employees in one room, to witnessing us reach over 100 people globally with 5 products is an incredible privilege. This is just the beginning for VoxSmart’s journey to become the largest Communication Surveillance business in the world.”

Reflecting on her 25 years as a Woman in financial services, Adrienne notes, “I want young women to know you can be a strong, sensitive, authentic women leader, from any background, and be successful. Just tap into your natural aptitude, work hard, be curious, and – importantly – be kind along the way.”

Launching this month to coincide with the 300th anniversary of the appointment of Britain’s first prime minister, Robert Walpole, in 1721, and in the year of Her Majesty The Queen’s 95th birthday, the book celebrates leadership in Britain and beyond over the past 300 years. 300 Years of Leadership and Innovation is a beautifully presented, fully illustrated hardback book, authored by a team of distinguished academics and award-winning writers.

We look forward to the launch on Wednesday 22nd September at Westminster Abbey.

The book is available for purchase here.